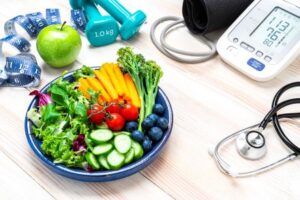 Several lifestyle changes have shown to have a positive impact on hypertension. Limiting the amount of sodium consumed in your diet is one way to help control high blood pressure. The American Heart Association recommends a sodium consumption of no more than 2300 milligrams (mg) per day for adults and for those with hypertension, limiting sodium intake to 1500 mg per day. According to the Dietary Guidelines for Americans, the average intake for those ages 1 and older is 3,393 milligrams per day, with a range of about 2,000 to 5,000 mg per day. Keep in mind, when an older adult is experiencing poor appetite, unintentional weight loss, or malnutrition best practice recommends following a liberalized diets and not focusing on sodium restrictions which could limit total calories consumed.

One teaspoon of table salt (sodium chloride) has 2300 mg of sodium. Sodium can be found in foods from almost every food group. Below is a list of foods that that may contain high amounts of sodium and limiting these items could help with achieving the daily sodium limits.

There are several strategies to help decrease sodium intake to the recommended limits. Choosing fresh and home cooked items, where the sodium can be controlled, is one of the first steps. When possible, choose fresh or frozen vegetables, dried beans, and fresh meat or poultry. A variety of foods can also be purchased in lower sodium or no added salt versions such as broths and soups. Season foods with sodium free options such as garlic powder, pepper, onion powder, oregano, or many other herbs and spices. When dining out, request that items be prepared without added salt and chose lower sodium foods.

The Nutrition Facts label is a great source of information to learn how much sodium is in a particular food item. The sodium amount on the food label is listed in milligrams as well as the percent Daily Value (%DV). The % Daily Value shows how much a nutrient in a serving of food contributes to a total daily diet.  Five percent or less is considered low and 20 percent or more is high. Look for food items that fall into that low range.

Along with sodium restrictions the National Institutes of Health recommends the DASH diet. DASH stands for Dietary Approaches to Stop Hypertension. The DASH diet focuses on lifelong approaches to healthy eating which is designed to help treat or prevent high blood pressure. The DASH diet includes a variety of healthy choices from whole grains, fruits, vegetables, fish, poultry, nuts, and low-fat dairy products.

Regular physical activity along with diet modification also plays a part in decreasing blood pressure. Some physical activity is better than nothing and it is never too late to start. Physical activity recommendations for older adults include 150-300 minutes of moderate-intensity aerobic exercise per week, at least 2 days per week of muscle-strengthening exercises, and balance training.

Research shows that blood pressure can be lowered with combined efforts of limiting sodium intake, eating a nutrient dense diet, and participating in physical activity. Choose daily to make some of the dietary changes listed above.  Remember that with any change, it may take time to adjust.